The Inaugural Meeting of the British & Irish Association of Robotic Gynaecological Surgeons was held at the Royal College of Obstetricians & Gynaecologists in London on 12-13 October 2010. The meeting was organised by Consultant Gynaecologists Mr Peter Barton-Smith of The Royal Surrey County Hospital, Professor Jeremy Wright of St Peter’s Hospital in Chertsey and Professor John Shepherd of The Royal Marsden Hospital.

The aim of the meeting was to bring together specialists who are developing an interest in the new field of Gynaecological Robotic Surgery using the da Vinci Surgical System that offers unsurpassed vision and precision in this field of surgery. The development of this type of operating is relatively new in the UK and Republic of Ireland, but has expanded significantly in the last 12 months, prompting the formation of BIARGS and the need for a meeting at which specialists could exchange ideas and learn new techniques. The meeting covered both benign and oncological conditions and analysed robotic techniques for hysterectomy, lymph node dissection, myomectomy, pelvic floor prolapse and endometriosis. Including doctors, patients and industry representatives, the meeting was attended by over 100 people

The meeting took place over two days at the RCOG and included an international faculty of experts; Dr John Dulemba from North Texas Hospital, Dallas, Professor Arnold Advincula from Celebration Health, Orlando and Professor Jan Persson from Lund in Sweden. It included presentations by accredited experts and live operating by Dr Dulemba and Professor Persson tele-conferenced from the leading UK gynaecological robotic surgery centre in the UK, The Royal Surrey County Hospital in Guildford. A patient symposium sponsored by The London Clinic allowed women who have undergone this form of surgery and those awaiting it to exchange experiences and ideas.

Intuitive Surgery had the latest da Vinci Si surgical robot on show in the RCOG and both surgeons and patients were able to try the technology out for themselves on dry training platforms. The Meeting was privileged to also receive a visit from the President of the Royal College of Obstetricians & Gynaecologists, Dr Tony Falconer and Past President Lord Narendra Patel of Dunkfield who both test-drove the robot and Past President Professor Alan Templeton. 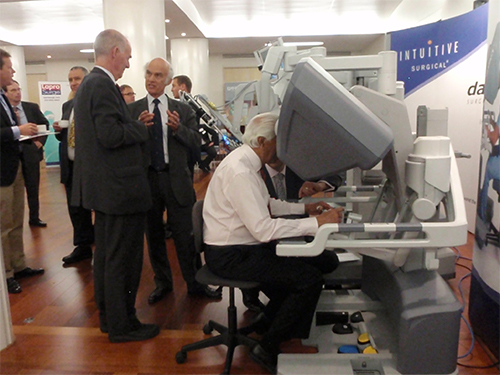 At the Conference the first Annual General Meeting of the Association was held at which Professor John Shepherd was elected as the first President and Mr Peter Barton-Smith and Professor Jeremy Wright were elected as Honorary Secretary and Treasurer respectively. Other members of the committee who were elected included Mr Simon Butler-Manuel of the Royal Surrey, Mr Thomas Ind of the Royal Marsden, Mr Ahmed Ahmed of the Christie, Manchester, Mr Nick Elkington of Frimley Park and Mr Matt Hewitt from Cork, Ireland who will be organising the next meeting in Cork in 2011.

Not yet a BIARGS member?